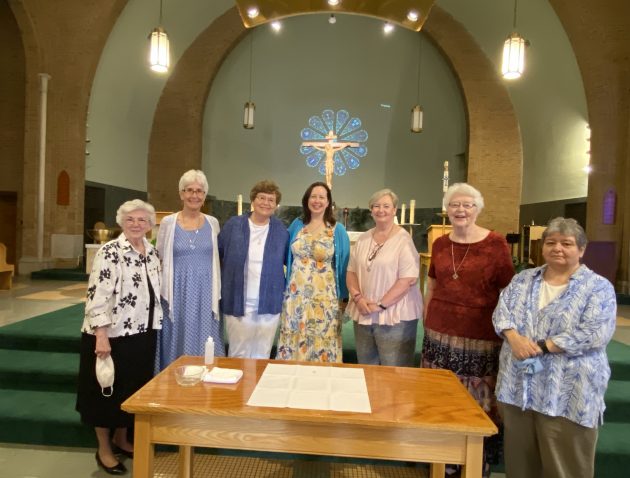 By Joyce Bibey
Surrounded by her extended family, friends, fellow Sisters, and parishioners of St. Vincent de Paul Parish, in Wheeling, Sister Jennifer Berridge professed her first vows for the Congregation of the Sisters of St. Joseph.
Despite having to wear a mask, it was obvious by her smiling eyes she was grinning ear to ear.
Sister Jennifer was declared a candidate in 2016. She entered into the Novitiate in 2018, which she affectionately called her “nun boot camp.”
Typically this extra special event would have taken place at the Wheeling CSJ Center at Mount Saint Joseph, but due to the pandemic and wanting to keep the elder Sisters living in residence there safe it was moved to a parish setting.
“I had a chance to sit down and talk to (Sister Jennifer) a couple weeks ago and had a great conversation,” said Msgr. Paul Hudock, celebrant of the Mass and pastor of St. Vincent, during his homily. “When she received word from her superiors that she was going to be taking her first vows she said she immediately smiled and couldn’t stop smiling. She was joyful.”
Msgr. Hudock went on to say the Lord gives us the gift of joy, and that joy is a reminder that God has “blessed us perfectly so we can live in the kingdom of heaven. We are God’s treasure.”
Sister Jennifer stood before the congregation taking the vows of poverty, chastity, and obedience.
The vow of poverty “means giving of your time, yourself, and resources for the life of the world, as we challenge ourselves to live ever more simply,” she said.
The vow of obedience “is deep listening to the voice of God. It is personal and communal discernment. It is about listening to my peers, to other sisters, and asking the question where the Spirit is leading us all at this time. It is being vulnerable, knowing I need to reflect and pray about what God is truly calling me to do,” she said.
The vow of chastity “means I belong to God and I agree to give and receive love – the healthy genuine love – of many,” she concluded.
For her, becoming a religious sister is allowing her to be “something greater than myself.”
Sister Jennifer will be mentored by Sister Chris Schenk for the next three years as she awaits and prepares for her final vows. During this time she will also continue her ministry to serve as a counselor and chaplain at Serenity Hills Life Center in Wheeling.
Read more about Sister Jennifer’s call to religious life at FaithInWV.org. To learn more about becoming a religious sister visit the Sisters of St. Joseph website at CSJoseph.org. To support the West Virginia congregation through your monetary gifts, mail them to Mount St. Joseph, 137 Mount St. Joseph Road, Wheeling, WV. 26003-1762.